Aluminium 6063 billet premiums climbed in Europe and Brazil on Friday July 30, while premiums in the United States and Asia were steady. Supply contract negotiations for 2022 have started, but high freight rates and a Russian export tax are likely to complicate talks.

“There’s still some upside and not much discounts in the market. Anyone who is selling below $1,200 [per tonne] is being bought up immediately,” a trader in Europe said.

Expensive logistics costs are making it difficult to bring in billet from places such as East Asia and are thus keeping supply tight in Europe.

“We got some offers from [Asia], but all the shipping liners aren’t giving you a guarantee,” a second trader in Europe said.

Freight rates are expected to continue to support billet premiums in the long term, market participants said, enabling producers in Europe to offer high premiums for supply contracts in 2022.

“We pretty much fixed all our Q4 supply, and we thought it’d be an easy July,” a producer in Europe said. “Things are running very fast and the negotiations are getting earlier this year. I have extruders asking for 2022.”

“[Logistics, export taxes and supply tightness], all the factors that drive the billet premium to be so high, will not be resolved next year,” the producer added.

Some deals for 2022 supply have already concluded above $1,400 per tonne in Europe, and other producers are offering at similar levels.

United States
Fastmarkets assessed the aluminium 6063 extrusion billet premium, delivered Midwest US at an all-time high of 21-25 cents per lb on Friday, steady since July 16 but up by 9.52% from 19-23 cents per lb in mid-June.

Spot deals were said to be limited, with many sellers prioritizing their contract customers.

Despite the lack of spot activity, market participants believe an extruder seeking spot units would need to pay a steep premium because of the lack of supply.

“Spot is low and volatile - when an aggressive seller meets a motivated buyer, it is still a recipe for very high billet premiums,” one producer said.

With regard to demand, extruders’ massive backlogs have kept contract metal consumption strong. Some backlogs were heard stretching through summer 2022.

And extruders’ struggles to find workers have weighed on output.

“If [extruders] had the people, demand would be even greater,” a second producer said.

Russian export duties, set to take effect next week, are expected to support the premium.

Extruders are keen to lock in supply for next year, expecting supply to remain tight, some sources said.

“I think there’s a lot of nervousness on the volume. We’ve got customers wanting to get stuff going,” one trader said.

Some supply contracts were heard to have been negotiated roughly in the current spot premium range - more than double what the premium was for 2021 contracts.

Other sources believe the negotiations will drag on.

“I noticed everyone’s waiting a big longer, even the suppliers, even with the levels of these premiums. They don’t know if it’s better to book now or wait a bit longer to see if they can get even higher than that,” a second trader said.

Said a third trader, “Everyone along the supply chain is very nervous about contracts… At very uncertain levels for freight, premiums, availability, duties - for a trader, this is a nightmare.”

The premium is at its highest since Fastmarkets began pricing the premium in September 2015.

“The premium in Brazil is still quite cheap compared to other global prices, but the rest of the world is providing support. The trend is there,” a trader said.

The market continues to look for indications of how the Russian export tax will affect the Brazilian premium in the coming weeks.

“There are a lot of bids coming from Brazil, so $500 per tonne and above is not a surprise,” a producer said.

Thailand
Fastmarkets assessed the aluminium 6063 extrusion billet premium, cif Thailand at $360-400 per tonne on Friday, unchanged since June 4. The premium is at an all-time high since Fastmarkets began assessing the market in February 2017.

Covid-19 outbreaks in the region have quieted spot demand. Participants are watching from the sidelines, with several extrusion plants in Vietnam and Thailand shutting indefinitely and some end-users pushing out deliveries.

“One of my suppliers was offering me volumes, as he now has an additional 3,500 tonnes of inventories to clear. This is quite unusual,” a Thailand-based buyer said.

With no clear picture on when operations might resume, many buyers are in no hurry to secure billet.

“Selling aluminium outside of Asia is still workable even with high freight rates,” one Singapore-based trader said, pointing toward other regional billet premiums that stand at all-time highs. 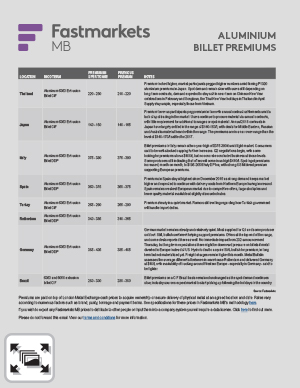